back   back to All Posts

This article was originally written and published in the Riot Act. Download the original article here

Editor’s note: We all witnessed in horror the devastation caused by bushfires in Tathra and its surrounding regions in the past week or so. As the local community begins the long and difficult journey of picking up the pieces, promoting local businesses in the area is one of the few ways we could show our support for a community that deserves all the help they can get. With this in mind, we hope this food review of a few well-deserved cafes lining the Sapphire Coast would inspire you to make that drive to the area and show your support for them too.

Something’s cooking in Bermagui. And down the coast road to Tathra for that matter.

Newly opened delicatessen; Eastwood’s, crowns a row of outlets at the start of the coast road to Tathra that not only activates a quiet part of town but enhances the area’s growing reputation as a foodie hub.
The Fishermen’s Wharf complex is well known for its restaurants, fish and chips, resort shops and gelati clinic, and now the new deli and its attached cooking school down the road has complemented Bermagui Cellars, the Mr Jones coffee haunt, and award-winning sough dough bakery; Honorbread.

Self-confessed food gypsy Kelly Eastwood, whose CV includes cheffing on superyachts and more recently being a TV food producer, fell in love with the area and specifically Bermagui while working on Tilba-based River Cottage.

She moved on to Family Food Fight when River Cottage folded but after toing and froing between Bermagui and Melbourne, Kelly committed to making a life on the coast.

“I was in TV for seven or eight years, and didn’t want to be in the rat race any more,” Kelly says.
“I came out here to Tilba and River Cottage, and moved to Bermagui eventually and absolutely loved it. There is no where else I want to be. And after being a gypsy for so many years I never thought I’d find somewhere where I could just go ‘that’s it’.”

And the three years of River Cottage gave her the connections to local food producers and artisans that would help her establish the deli and cooking school, which is heavily subscribed, mostly by locals.

“I was thinking about all the things that I missed, foodwise,” Kelly said. “The charcuterie, salads and looking at what we don’t have in town,” she says.

The emphasis is on local produce, such as the lettuce that has won a Delicious award and the Tilba Real Dairy.

“People come in and say my garden’s full of zucchinis or basil, do you want that? Yep,” she says.
Her popular artisan doughnut stall last year used Tilba dairy for custard, local fruit for jams, and Eden hazelnuts, to make a version of Nutella.

“I try to source as much locally as I can but we’ve also got a few interesting things that we can’t find. Things people drive to the city for,” she says.

“All of these shelves here will have Asian ingredients, Spanish, Portuguese, Mexican, stuff we can’t get around here.”

That also includes Spanish and Italian cured meats, the pork banh mi – Vietnamese pork roll – and for coffee snob Kelly, Five Senses Coffee from Melbourne, although I do my best to promote Canberra’s growing number of roasters and brewsters.

It’s a diverse offering that reflects her business model.

“For a town like this living in a rural area, it had to be a business model where you can’t just do one thing, you can’t just be a café, you cant just be a deli, it’s got to have other layers to it,” Kelly says.

Part of that is the cooking school, three-hour after-hours workshops run by teachers involved in River Cottage that are being lapped up for the locals but would be perfect for Canberrans on holiday.
The fit-out is coastal and country, with blue and yellow tiles and polished timber benches, and out the front, a community garden is planned.

Kelly is enthusiastic about her neighbours saying “It’s kinda like a food street now”. 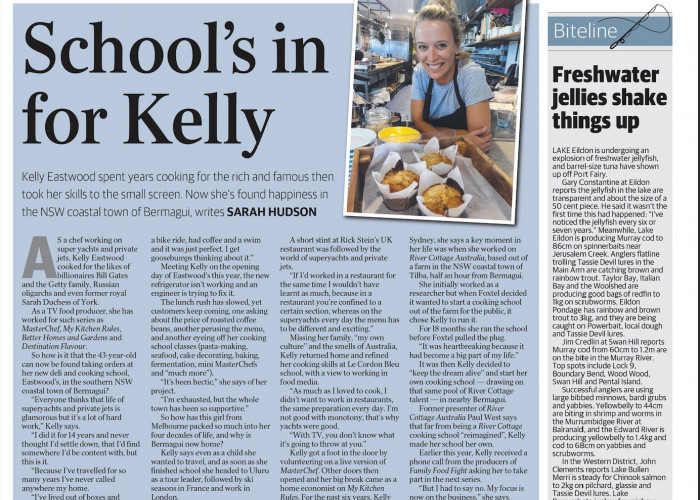